Every moment is an Event

Nothing says we are here to party like a Jager machine. Serve this Jägermeister (/ˈjeɪɡərˌmaɪstər/, YAY-gər-my-stər, the way it is best appreciated. You name the location and we will be there. Flair Tender will ensure that we set up everything for you long before your guests arrive. So when the party starts its just smooth sailing all the way.

A little insight into this amazing product

The history of Jägermeister starts in 1878 with Wilhelm Mast, who was a vinegar manufacturer and wine trader in the city of Wolfenbüttel, Germany. His son, Curt Mast, born in 1897, was passionate about the production of spirits and liqueurs, always keen to help his father in the business even at an early age. When he was 37 years old, after he successfully took over his father’s business, Curt Mast finally came up with the perfect recipe for his new herbal liqueur, which he called Jägermeister, in 1934.

Curt Mast, the original distiller of Jägermeister and son of the founder Wilhelm, was an enthusiastic hunter. The name literally translated means “Master Hunter”, “Hunt Master” or “master of the hunt”. It is a title for a high-ranking official in charge of matters related to hunting and gamekeeping. The term Jägermeister had existed as a job title for many centuries. It was redefined in 1934 in the new Reichsjagdgesetz (Imperial Hunting Law), which applied the term to senior foresters, game wardens, and gamekeepers in the German civil service. Hermann Göring was appointed Reichsjägermeister (Imperial Gamekeeper) when the new hunting law was introduced. Thus, when Jägermeister was introduced in 1935, its name was already familiar to Germans—it was sometimes called “Göring-Schnaps.”

Jägermeister came to greater international attention particularly through the work of Sidney Frank, who ran an American liquor import company. He promoted the drink at the youth and student market, as a drink for parties, a quite different niche to its traditional conservative brand position in its native market.New York magazine quoted a market research firm as describing him as a ‘promotional genius’ for making “a liqueur with an unpronounceable name…drunk by older, blue-collar Germans as an after-dinner digestive aid…synonymous with ‘party’.” The Mast-Jägermeister company ultimately purchased Sidney Frank Importing in 2015.

In 2012, Jägermeister launched premixed drinks as a brand extension. The drinks come in two flavours, “raw” and “ginger lime“. 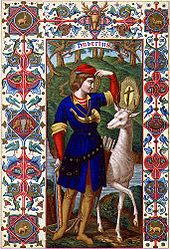 An icon of Saint Hubertusdepicting his vision of a crossbetween the antlers of a stag.

In the product name on the label is one of the few surviving examples of the use of the long s in print.

The label contains the following verse from the poem Weidmannsheil, by the forester, hunter, and ornithologist Oskar von Riesenthal (1830–1898); von Riesenthal is not credited on the label.[17]

According to Mast-Jägermeister SE,[18] the translation is:

It is the hunter’s honour that he
Protects and preserves his game,
Hunts sportsmanlike, honours the
Creator in His creatures.

A loose translation which preserves the rhyme and meter is:

This is the hunter’s badge of glory,
That he protect and tend his quarry,
Hunt with honour, as is due,
And through the beast to God is true.